First review for my new book ‘Portrait of a House’

After 14 years photographing New Zealand architecture, professional photographer Simon Devitt today launches his first photo book, Portrait of a House, on Wellington’s much deliberated Ian Athfield structural conglomeration on the hillside of Khandallah. Jill Wild talked to Devitt about the book, his selection of subject and the reason why he has turned one of the country’s more controversial builds into a photographic story book.

Simon Devitt has seen a multitude of houses and structures from almost any angle, by day and night. Through his lens he evokes emotion, transporting his imagery into storybook tale, each picture an essay on its own, and each image an impression for individual contemplation. For this man a house is so much more than walls and a roof, and through his lens he has, for years, tried to tell the stories he sees.

So as a first fray into a photo book what better ‘home’ to feature than that of architect Ian Athfield, who for nearly half a century has been meandering down, up and around on his Khandallah hillside with structures, fearless of community and council reaction, erecting builds that are very individual and fitted for needs as they arise.

Such is the depth of Simon Devitt and his camera it was almost inevitable he would choose to advance his already well accomplished skills in this book form, emulating New Zealander Robin Morrison who in 1978 published a photo book about a house designed by William H. Gummer, a book Devitt confesses he has always admired.

“A house is a pretty refined subject to make a book about,” explains Devitt. “It is not market driven, it is content driven and born out of passion. Life has happened there like in no other house, and the ‘living’ leaves its evidence, time has played out on its surface. There is a lot to be said about sitting still and how that looks. The Athfield house is a wonderful example of this. An accessible counterpoint to a largely asset based living that pervades New Zealand.”

In addition to Devitt’s exquisite and thought provoking imagery are his words, carefully chosen, explaining why the Athfield ‘village on the hill’ is and should be a noteworthy part of Wellington’s history and in detailing that significance the reader appreciates this critical record of imagery in book form.

The Athfield architectural experiment started in 1965 and continues on today, unabated, a growing and changing test of structure and living, both for the individuals and workers within and the community and authorities without.

Devitt says the house is renowned in bohemian and academic circles for its many colourful dinner parties and occasions, and is infamous with neighbours past and present for the antics of its free-range livestock and frequent run-ins with Council.

“Roosters have been shot, construction shut down and architectural pilgrimages made. At last count 25 people live in its array of buildings, with 40 people working for Athfield Architects within its walls.”

Paradoxically the Wellington City Council gave Ath’s village a heritage listing years ago. The council website states ‘to be included in the Heritage List, a place, building, object or tree must have archaeological, architectural, cultural scientific or technological qualities, or be significant to tangata whenua and other Māori.’

Devitt says Ath laughed “what a bloody cheek!” and had the status changed to ‘organic heritage’ so that he could continue working on it. So the maverick architect has created an important piece of New Zealand history. About his almost 50-year experiment he understatedly concludes, “it hasn’t been entirely successful but it hasn’t been a failure.”

Devitt’s passion for his subject is evident in his gathering of historic photographs, paintings and drawings drawn from the Athfield family archives. A history embellished by personal letters from family, friends, colleagues and clients which Devitt says are insightful and often funny, making the photographic records ever more poignant in telling the tale of the building, changing and growing cluster of Athfield structures on the Khandallah hillside. A ‘heritage’ or ‘organic heritage’ village history accompanied by recipes from Ath’s wife Clere dating back to the 60s when works began and as the build developed so did the parties and ‘round the table’ discussion about architecture, the project, possibilities, probabilities and community and council response.

Devitt’s sense that ‘the walls can talk’ is evident in this photo book, produced in collaboration with graphic designer Arch MacDonnell. It’s a wonderful first venture into the photo book genre for this photographer, whose work is regarded as some of New Zealand’s most important architectural photography. He has been published extensively both locally and internationally, contributing to over twenty books and magazines, but this venture is new an exciting and significant record for the country.

Portrait of a House is launched today in Wellington. Only a thousand copies will be printed with one hundred special editions that include one of five photographic prints. At 140 pages, uncoated paper, an exposed, section sewn binding and cardboard case, Devitt expects the book to be a collector’s item for those interested in New Zealand history, architecture, design and photography.

And for Wellingtonians who have traveled the motorway passed Ath’s village on the Khandallah hillside, often wondering what the structure is all about, this book offers a chance to walk through the door and look around through the lens of Simon Devitt and an opportunity to read about the goings on the hill that have continued for nearly half a century and over three generations.

As an Auckland photographer, it’s a tribute to Simon Devitt’s love of architecture, houses and the people therein that this book on a Wellington hill hamlet has been produced, an exquisite record of one architect’s passion to create a family base for generation to generation. 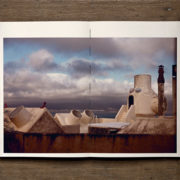 Want to join the discussion?
Feel free to contribute!

On the Shelves Wellington ‘Portrait’ Launch
Scroll to top